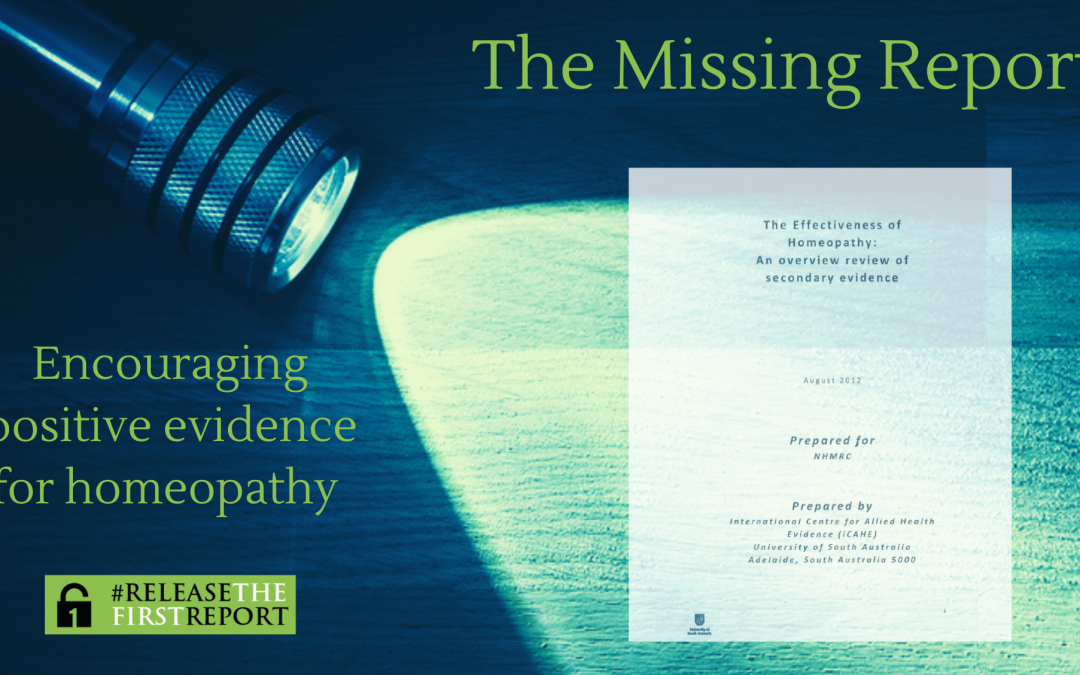 Thanks largely to public support for the Release the First Report campaign, Australia’s leading research institute, NHMRC, recently gave in to public pressure and released its first report on homeopathy, produced in 2012 but buried until 26 August 2019.

As we always expected, the draft 2012 report is far more positive than the second NHMRC Australian Report published in 2015, which has caused widespread damage to homeopathy.

The First Report found “encouraging evidence for the effectiveness of homeopathy” for five conditions, including otitis media (ear infections), upper respiratory tract infection in adults, and some side effects of cancer treatment.

As Rachel Roberts, HRI Chief Executive, explains, “The first report found some good evidence that homeopathy works for certain medical conditions. More studies are needed to confirm and build on these findings, but some evidence is very different from no evidence.”

NHMRC fought against releasing the First Report for 4 years, so this is a huge win for public accountability,  but perhaps even more importantly, the NHMRC CEO has finally put the record straight about the second ‘Australian report’ published in 2015.

Publication of NHMRC’s 2015 report triggered inaccurate headlines around the world – from the UK: “Homeopathy not effective for treating any condition” (Guardian) to the USA: “1800 studies later scientists conclude homeopathy doesn’t work” (Smithsonian.com).

NHMRC Chief Executive Prof Anne Kelso’s has now finally admitted that, “Contrary to some claims, the review did not conclude that homeopathy was ineffective” (CEO Statement, 26 August 2019).

It is shocking that NHMRC has never corrected this misinterpretation of their report before. When these widely inaccurate headlines first circulated in March 2015 NHMRC stayed silent.

When the story hit the media again in February 2016 they said and did nothing.

Even when the NHMRC 2015 report started to have a real-world impact being used to make decisions against homeopathy in countries all around the world, they failed to step in and clarify what their report had really found – that even when the amount of evidence was drastically reduced by using their totally unjustifiable method created just for this review – the results showed the evidence for most conditions was inconclusive, not negative.

The CEO finally making it clear that their report never said homeopathy doesn’t work is a crucial and welcome first step towards NHMRC undoing the damage they have single-handedly caused to the homeopathy sector worldwide.

Find out more about the buried First Report here.